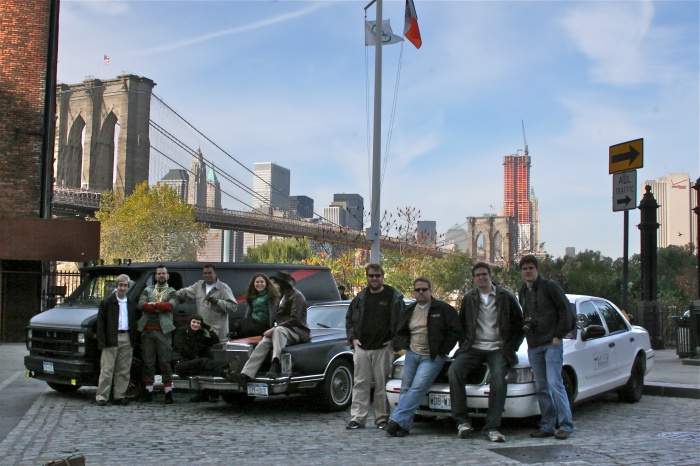 Everyone's favorite shameless waste of resources still went down during the worst recession in history. Huzzah!

After a slew of last minute bail outs and a heck of a kick-off party, three rusted relics and their hungover crews creaked out of NYC heading for the Left Coast. Through an act of sheer will, and willful ignorance, their sagging frames and aging engines were piloted across the country almost non-stop for over a day and half.

Off first was Team Interceptor, having only arrived from Missouri a day earlier in their retired cop car covered in sex toy logos. Next up was Cookin With- Gas, piloting the longest, heaviest, and hands down funkiest car in The 2904 history. Finally, hours later after installing two massive fuel tanks, The A-Team roared into the NYC night, punching a hole in the shape of their legit A-Team van through the chilly night air.

Outside of a few close calls with daredevil wildlife and surprisingly heavy fog, the first day went well for all. But, as we all know, the real trouble doesn't happen till you cross the Mississippi. Take Nebraska, for instance. In the early morning somewhere on the east side of the Cornhusker State, Team Project Interceptor's alternator, tired of running their 14 radar detectors, laser jammers, and talking dildos, up and quit, leaving them stranded in for two and a half hours. This allowed The A-Team to catch up a bit and take the time lead, which they held till San Francisco.

When all was said and done, the A-Team took The Crappy Trophy with a new record time of 37 hours 8 minutes, and impressively wasteful 10mpg. Meanwhile Cookin With-Gas trolloped across the States in their mobile 70's disco lounge cooking their meals on the engine as they went. With a custom flame job and a complete be-furred party haven in the trunk, they took home the inaugural style award, The Crap Cup.